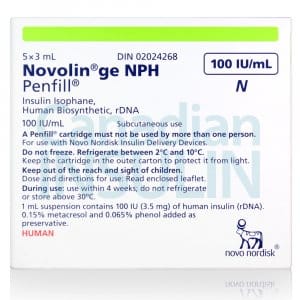 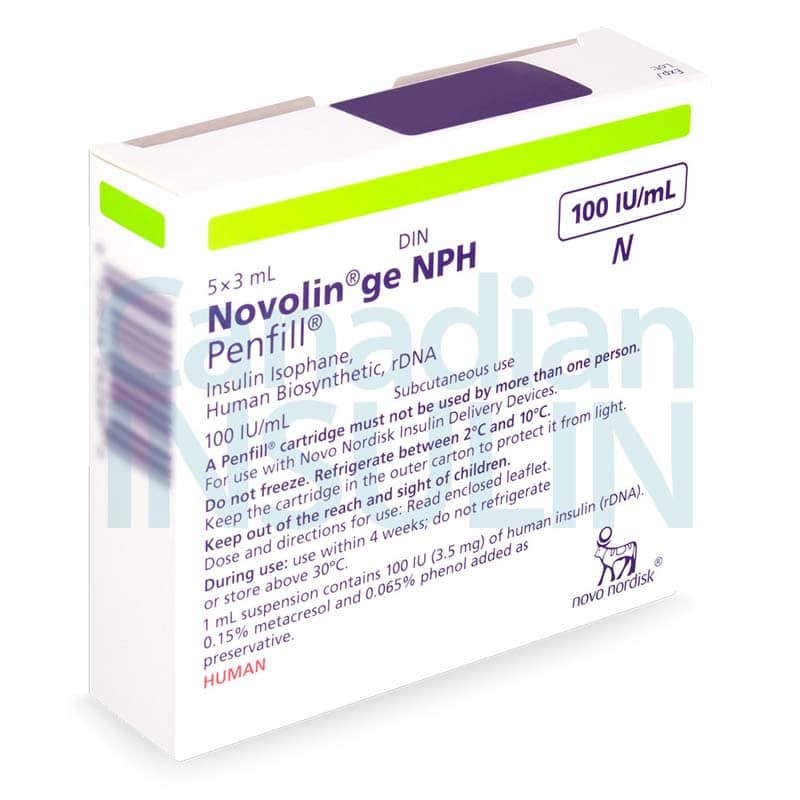 Pack with 5 cartridges x 3 mL each

Novolin ge NPH PenFill Cartridge is an insulin cartridge that contains Novolin ge NPH, for use with your reusable insulin pen. It is a man-made intermediate-acting insulin used for the control of high blood sugar in the treatment of diabetes. The cartridge comes in 3 mL size in a pack of five.

What is it used for?

Novolin ge NPH PenFill is used with your reusable insulin pen for the control of high sugar levels in the treatment of diabetes. It is an intermediate-acting insulin, administered subcutaneously (under the skin), and is commonly used together with a fast-acting mealtime insulin to protect you against the blood sugar spikes that occur during and after eating.

How do they work?

These cartridges work with your reusable insulin pen to deliver Novolin ge NPH insulin, which works similarly to the way naturally occurring human insulin does. The main difference between this insulin and natural insulin is that it has a longer duration of action. Insulin is a hormone normally produced by your pancreas, which is a large organ near your stomach. It is chiefly responsible for food metabolism, helping your body use and store the sugar that your body creates by processing food. If you have diabetes, either your pancreas does not make sufficient insulin or your body can not use the insulin that it does make properly. Because sugar can not be properly stored or used up, it builds up in your bloodstream causing high blood sugar levels.

Novolin ge NPH insulin is taken by people who have diabetes as a substitute for their lack of naturally produced insulin. It is an intermediate-acting insulin, which is sometimes called basal or “background” insulin. It provides a long duration of insulin action for regulating your blood sugar levels throughout the whole day. Small proteins called protamines are mixed into the Novolin ge NPH insulin, which is otherwise structurally identical to naturally occurring insulin, to give it a longer duration of insulin action. After injection, it usually takes 90 minutes to start working, then reaches its maximum effect between five and eight hours after, and it stops working after approximately 18 to 24 hours.

Common negative effects may include:

Less common negative effects may include:

Hypoglycemia is the most common side effect of using insulin. It is important that you always carefully monitor your blood sugar levels. If left untreated your low blood sugar can cause the loss of consciousness, coma or even death.

When your body does not have enough insulin, a condition called Diabetic ketoacidosis (DKA) can occur. Symptoms typically come on slowly and may include excessive thirst, a flushed face, feeling drowsy and a loss of appetite. If left untreated, DKA can cause the loss of consciousness, coma, or even death. If you think you may be having any of these symptoms get medical assistance immediately.

Symptoms of a generalized insulin allergy reaction may include

Generalized allergy reactions may be very serious and can require hospitalization. If you think you may be having a generalized allergic reaction to Novolin ge NPH, contact your doctor immediately.

How to use it

The insulin inside Novolin ge NPH PenFill Cartridge should be a cloudy or milky suspension. The insulin may have settled at the bottom of the cartridge so it must be rotated up and down before use. Before you give yourself a dose make sure that the suspension is uniformly mixed. This insulin medication comes in a 3 mL cartridge that is to be used with your reusable insulin pen. Once a cartridge is empty, simply replace it with a new one.

Your doctor will have established a dose and dosing schedule that is individualized for you specifically based on your personal metabolic needs, blood sugar level monitoring, type of diabetes, and your history of treatment and use of insulin. Various factors can influence your dose, some of which may include changes in your diet and meal pattern, activity level, or work schedule. Other factors that may affect your dosing are travel, pregnancy, medication and illness.

If you are receiving insulin for the first time, you should be closely monitored during your adjustment period.

If you are switching from another insulin to Novolin ge NPH, you may require a change in dosage. The dose adjustment may be made with the first dose or over the first few weeks. Any change in insulin, or dose, should be made cautiously and under your doctor’s close supervision.

Do not take this medication if:

Taking diabetes medications called thiazolidinediones (TZDs) together with Novolin ge NPH may cause heart failure, even if you never have had heart issues before. Let your doctor know if you have any symptoms of heart failure which may include: 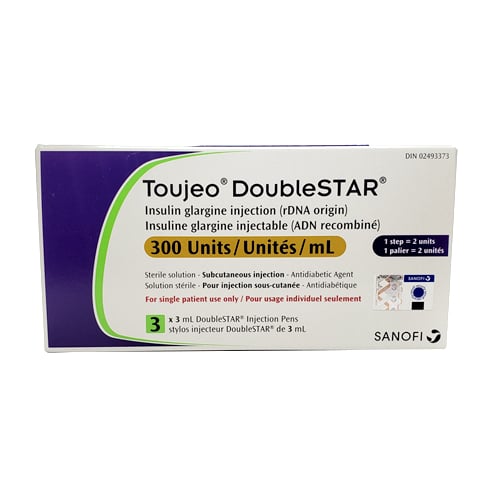 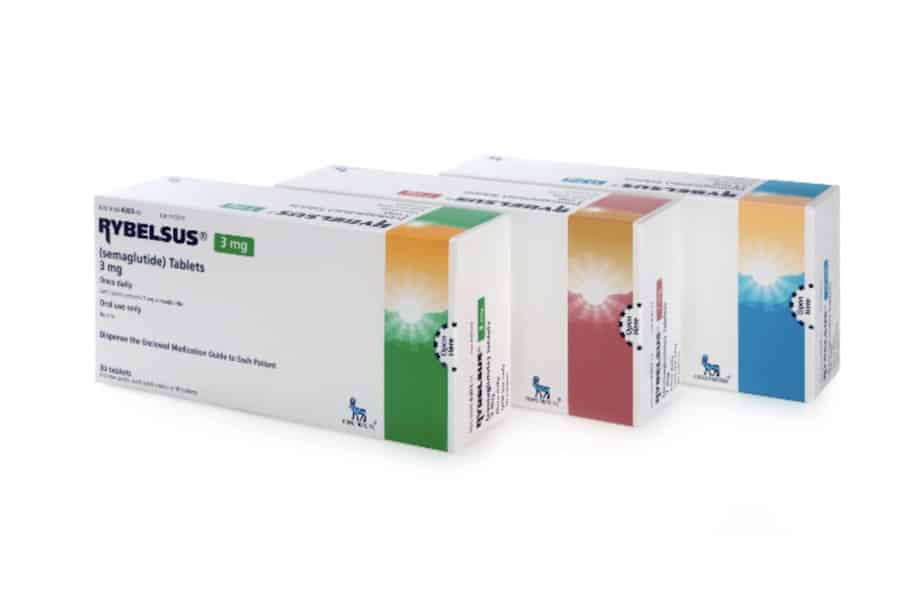 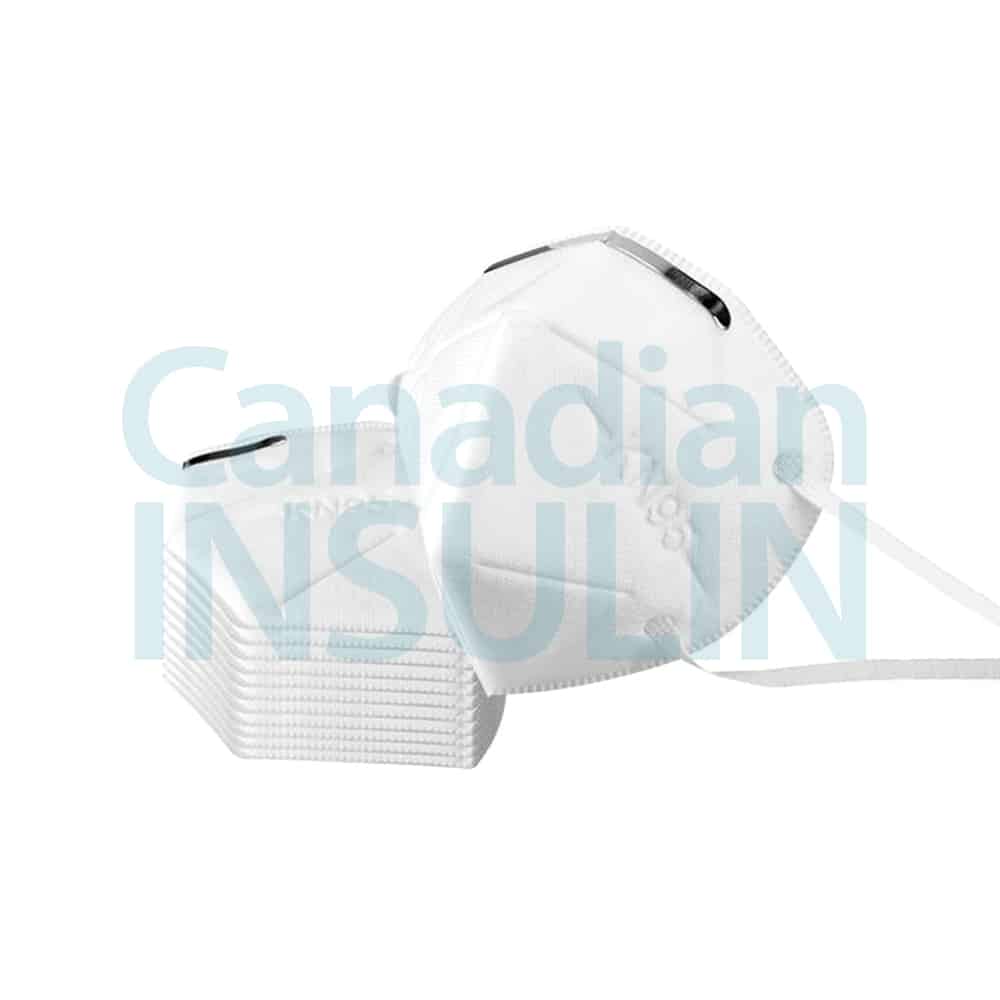